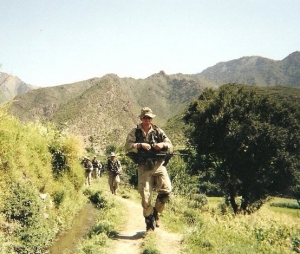 John Calvin Buckley IV was a member of the U.S. Army’s elite 3rd Ranger Battalion. He served in the Army from August 2000 through December 2005, earning citations for valor in combat and a Purple Heart in deployments to Iraq and Afghanistan. Now he rots in prison, a victim of Kentucky justice, despite having passed a polygraph exam that clearly establishes his innocence, in a strange case involving corrupt police officers, a 50 Shades of Grey-style sex life, and betrayal.

John saw his first combat at age 18, 40 days after he watched the planes slam into the World Trade Center. His small unit was the first to officially enter into the War on Terror in Afghanistan. John was wounded in Tora Bora, and fought in the initial invasion of Iraq. John was honorably discharged in 2005, certified by the VA as 100% service-connected disabled due to combat-related post-traumatic stress (PTS) and Traumatic Brain Injuries (TBI). After being on the edge for so long, John had difficulty returning to civilian life.

He is not unusual. After multiple combat tours in this war, many of his brothers suffer as well, and 20 or more commit suicide daily. Many combat veterans turn to various vices (alcohol, drugs –both licit and illicit – and sex) to self-medicate and forget for a time the horrors they experienced. John’s vice was sex. He sought out sex, and lots of it. Raised in a devout Christian family, John was conflicted, but the sex made his worries vanish, and quickly became an addictive habit.

The encounter that would change John’s life forever

When he finally returned from the Middle East, a random encounter in a Lowe’s parking lot in October 2009 changed John’s life forever. Driving slowly with his girlfriend and infant daughter in the rain, John stopped short of hitting a man who suddenly stepped out from between two cars. The man cursed, shouted, and charged John’s car, banging his hood and moving menacingly to the driver’s window. John’s training kicked into action. Thinking he was being carjacked, he drew his legal firearm and ordered the man who was suddenly banging on his driver’s window to lace his fingers behind his head and go to his knees. At the same time, he told his girlfriend to dial 911.

It was only after being peaceably subdued that the man identified himself as Lexington (KY) Police detective Steven Cobb. After finally identifying himself, Cobb (who had a reputation as a bully, and was publicly censured at least twice for his conduct – including domestic violence – by the Lexington Urban Council) continued to threaten and curse John as he knelt on the ground, telling him very crudely how he was going to “get him.” John was arrested for numerous felonies related to the Cobb confrontation. A Grand Jury met to decide if he would be prosecuted – and all charges were dropped in less than five minutes of deliberation after eyewitnesses corroborated John’s story.

John’s own lawyer was called by police contacts within one hour of the Grand Jury findings and told “No one pulls a gun on a cop in Lexington and gets away with it.”

John was now in the crosshairs of the Lexington Police. Local law enforcement began harassing and charging John with other crimes (all these cases were ultimately dropped). The detectives harassed his family as well, even threatening his child’s foreign-born mother with deportation and loss of custody of John’s child if she did not help them build a case against John. 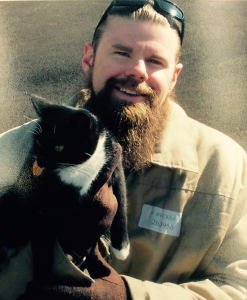 sex with their usual 50 Shades-style trappings, which are of course violent in appearance. They also taped their encounter (as they had done a number of times previously). When she left his home, unbeknownst to John, Jessica called the police and made accusations which ultimately led to numerous charges, including rape.

Early the next day, a fully armored SWAT team stormed John’s house and he was arrested. The tape of his sex with Jessica was in plain view, sitting on his bedside table (what rapist leaves evidence of the crime out, much less tapes it?). The trial was a travesty. Jurors were shown the tape of John and Jessica’s sex, which to anyone unfamiliar with BDSM can easily look scary and violent. John was not allowed to put this video in context by discussing the well-documented world of BDSM and 50 Shades style sex, the videos he had of similar consensual encounters, or the many photographs featuring a willing Jessica. Under Kentucky’s rape shield laws, he was stripped by the trial judge of any credible defense that explained his consensual relationship with Jessica. He was also not allowed to mention disproven rape allegations Jessica made against other men previously. The man that she called to come and have sex with her just hours after the alleged rape was not allowed to testify either. In fact, in her original 911 call, Jessica never used the word rape. That came later, when Detective Andrea Burkhardt (friend and colleague to the vengeful Mr. Cobb) showed up on the scene to interview her.

John passed a polygraph test with flying colors [click here to view the actual test results], but this held no weight with the court because polygraphs are inadmissible as evidence.

From the outset, the prosecutors made no allegation of direct force or threat in the sex act (a key element of the crime of sexual assault). Instead, prosecutors centered the case on John’s military experience as an Army Ranger and combat vet. Apparently, they believed that serving our Nation fulfilled the element of “implied threat” necessary for conviction. Taken to its logical conclusion, the prosecution’s reasoning was that any sexual contact John had since coming home from the war could be construed as sexual assault simply because he was a special operations (a category which includes all Rangers, SEALs, Green Beret, and Delta Force teams) combat veteran.

In a blind panic, as John saw his life being taken away, he fled the courthouse before the jury returned with its verdict. With no planning or resources, he walked into the woods of West Virginia and survived for almost a year. He was captured in Wyoming and returned to Kentucky for sentencing. Three weeks before John’s sentencing, the judge who sentenced John had sentenced a different man who had murdered his mother and cut her into little pieces to 25 years. John, on the other hand, received 39 years of prison time.

Now, John rots in jail. He cannot visit with his daughters. His father has been banned from visiting as family legal counsel under false allegations from prison administrators and cannot meet with John face-to-face, only through 4″ of glass with a corrections officer present. He is alone, but still holds hope that justice will prevail, that our country has not failed him after he served it so bravely, that the truth will ultimately set him free.

How you can help

Two minutes of your time can help us set John Buckley free from a 39 year prison sentence delivered for a crime he did not commit. Click here to help us set things right.