Letters from John: Another update, another stint in solitary

Letters from John: Another update, another stint in solitary

To my friends, loved ones, supporters, and curious people, 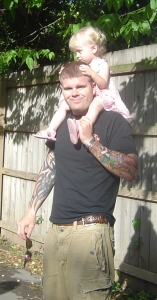 John with his daughter

Another update from your favorite political prisoner here.  This update I have to write by hand due to the fact that I’m in the hole, AGAIN!  I was put in the hole “under investigation by internal affairs.” I haven’t been told why, and they don’t HAVE to tell me WHY.  Much like the last time I did all of those moths in the hole down @ Eddyville for no reason, this is an aspect of prison life that most people, outside of prison, are unaware of.  I thought that maybe I would shed some light on it in this update.

As many of you know, I have done A LOT of time in solitary confinement.  My last was for a year.  Back in 2015, Kentucky commissioned an investigatory panel to study the effects of long term isolation on inmates. Based upon the panel’s recommendations, the state legislature passed a law limiting the amount of time an inmate can be in solitary confinement to no more than 30 days at a time.  This law went into effect in June—the same month I was put into solitary (isolated segregation). Instead of doing only 30 days, the first time I saw daylight again was a full year later.

It was interesting to observe the masterful way in which the the KY Dept. of Corrections (DOC) navigated around the law. The instituted a new method of inmate classification called “Administrative Control” which allows each prison, at the discretion of its warden to hold inmates in solitary confinement for 90 day cycles at the end of which the Warden can decide to start the cycle over, or not.

The reasons for an inmate being placed on “Administration Control” (AC) don’t necessarily have anything to do with the inmate doing anything “wrong”, i.e. fighting, getting caught with drugs, etc.  KY DOC has a list of policies that was amended to outline instances when inmates can be placed on AC—things like gang activity—which could mean being with a group of people in the yard. “Excessive violence” are on the list along with a little addendum at the end “or anyone who has been deemed a threat to the safety and security of the institution as determined by the Warden or his designee.”  Saying that someone is a threat to the safety and security of the institution is kind of like calling someone a terrorist in the outside world.  It doesn’t have to be true, but the accusation is enough to suspend a citizen’s right to due process.  Almost every single detention order I’ve seen of the hundreds of inmates I’ve watched over time be place on AC has said the same thing, “the inmate has been determined to be a threat to the safety & security of the institution.”  I know most of you reading this must be thinking, “Oh, they must have been planning to escape” or “Oh, they must have hurt people.” In 99% of instances that just isn’t the case. The truth is far more nefarious.

Now here’s the pat that sounds like a conspiracy theory, but this is all verifiably true. When an inmate is in General Population (GP) on the yard, the state pays the DOC a certain amount of money per day (yes, there is money being made off of mass incarceration). Let’s say $35 per inmate, per day, in GP.  When an inmate is in solitary confinement (SC), the DOC gets $100 per inmate, per day, to pay for “extra security”. Yes, there is a monetary incentive for inmates to be kept in solitary confinement (SC).

**Actually, a statistic I pulled out of Prison Legal News (published by the Human Rights Defense Center) puts the GP cost at $35,000 per inmate per year which would put the daily GP rate at $96/day and the “higher security” rate at $175 per inmate per day, but I don’t know for sure if these numbers are accurate for KY)

I’ve never been in a Segregation unit at any of the prisons I’ve been to that wasn’t full or almost full at all times.  Indeed, I’d wager my last dollar that right now, as you read this, there are few (if any) empty segregation cell at ANY prison in the Kentucky Department of Corrections. Or any other state prison system for that matter.  It’s just not good business.

Several years ago, the National Commission on Correctional Health Care (NCCHC) issued a 17-point position statement which defines prolonged solitary confinement of more than 15 days as “cruel, inhumane, and degrading,” and condemns the placement of juveniles, pregnant women and the mentally ill in segregation for any length of time.  The NCCHC further states that correctional health care professionals “should not condone or participate in cruel, inhumane or degrading treatment of adults or juveniles in custody,” and that they should advocate for people to be removed  from solitary confinement, as well as prison policies regarding same to be reformed. The Commonwealth seemed to be on the right track with its amendment of its long-term segregation policy, but as with most things government they left themselves a back door so they had the appearance of concerned professionals, while in reality they could still bury a man forever using a vague term that required no evidence to sustain.

While I was doing that year in the “hole” (total isolation) I asked a sympathetic guard to do a poll for me. “How many men in the segregation unit have been in isolation longer than 180 days?” There are 215 segregation cells at Eddyville and they are never empty. But back where I was, in the total isolation unit (you have absolutely zero contact with anyone, you get an hour a week outside your cell—and in a little cage area with a roof and walls on 3 sides—and you never see other inmates), 55 out of the 60 cells (in the “hole”) had been in isolation for longer than 6 months, some as long as 7-10 years.  Mind you, this was AFTER the 30-day rule went into effect.  I’d love to see KY DOC get audited for their inmates being held beyond 30 days throughout the state, and hear specifically what makes them “a threat to the safety and security of the institution.” As I write this, it is my 30th day of isolation without cause. Since coming to prison in 2013, I have done more than 30 months in isolation.

I estimate that the property room “confiscated” approximately $200 worth of my worldly possession this time around, another little gem of the “hole”—guards are known for taking an inmate’s property home with them, especially if it’s damaged in any way or marked.  I suspect they’ll find a way to keep me in here beyond tomorrow, all without giving me a reason (there is NO reason, I haven’t done anything wrong although I admit the urge to rebel can be quite overwhelming at times like this).

**John was transferred shortly after this letter was sent, again with no reason, and even though John, his case worker and therapist, and us all lobbied to have him remain.  Please see UPDATE concerning his location at the end of this update from John*

I’ve said it before, I’ve had P.O.W.s in my care before, in Afghanistan and Iraq, men who had either tried to kill me or had killed my friends. I never treated them as dishonorably as I have been treated by my own countrymen.

If you’re reading this then I hope you’ve been following my story and you’re convinced by now that I am innocent.  From a purely sociological standpoint, this is all quite interesting–this a world that I never knew existed. While interesting and shocking it may be, pleasant to endure it is not! Being totally honest, had I known that this was what freedom in my country looked like, I may have thought twice about taking that oath to serve. Long-term isolation (torture) will continue as long as our policy makers are not held accountable.  Many of our citizens will take the stance that, “They’re in prison, good riddance.” But if you believe in my innocence or you believe that there could be other innocent people behind these walls who this is happening to, then this is not just morally outrageous, but is the antithesis or everything this country is supposed to be!  In any event, innocent or guilty, this is not how we should be treating people in America.  It’s a true tragedy.

I truly thank you ALL for sharing this struggle with me as well as your prayers and support, and sharing my story with others.  It means more than I can say–I wish you all well!

(if you haven’t read John’s appeal, please go to: http://justiceforjohnbuckley.com/legal-filings/ , we think you’ll agree that John never had a fair trial, that he should never have been convicted and that he should be a free man!  And please– share his story with others who may want to help support our legal efforts, and with media sources that can help us reveal his plight on a national level.)

More on John and his situation, including a recent transfer, can be found in this letter to his aunt Carol.