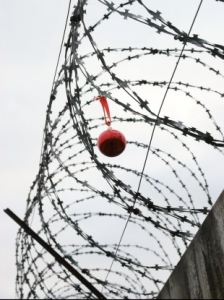 We send John word of your support while he waits behind bars for his wrongful conviction to be reviewed. For someone in the Kentucky legal system to take note. We can’t tell you how appreciative John is, and he’s working to share more about his experience being locked up for a crime he did not commit in the free time he’s allowed to send letters to the outside. Now, a letter straight from John to you:

I don’t know exactly what day of the Hostage Crisis this is but we’ll just call it day 2000. This madness began in 2010. That’s a long time of existence under this yoke of oppression. As the Christmas and the New Year fall upon us I would ask that you all ask yourself what freedom really means to you. Growing up in the 80’s and 90’s I found my patriotism to be truely heartfelt. My heroes were the defenders of this nation, and the gatekeepers of my freedom. Never in a thousand years would I have imagined that I would be on the opposite side of that paradigm. The oppressed as opposed to the guardsman of freedom. We have all been socialized to believe that freedom is the most central tenant of our culture from the first time we said the pledge of allegiance in kindergarten. Being on the opposite side of the spectrum I am shocked at the reality of what “freedom” is in our country.

I call my pre-prison existence as life in the “Matrix” (referring to the Movie) and my post-prison existence as the “Land of the Real.” It is more than easy to snatch our “freedom” from us as a current number of 2.3 million Americans spending this Christmas behind bars illustrates. Don’t get me wrong. I believe in Law and Order. I have been to lawless places in this world and that is not what I wish for my 3 precious daughters. However, a system that is racially unbalanced, class based, and actually PROFITS from depriving Americans of their freedom, guilty or innocent, deserves more oversight and reform than currently exists. I was one of the people who espoused the “if you don’t like it, don’t break the law” mentality until I experienced it for myself. Please, read my story. See this system for what it is and in the coming year help me right this horrible wrong. Merry Christmas.